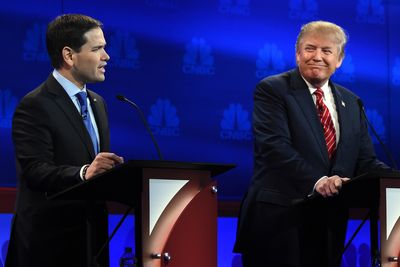 The next primetime Republican presidential debate will be Thursday at 9 pm Eastern. It will take place in North Charleston, South Carolina, and will air on the Fox Business Network. A live stream will be free and available to all at FoxBusiness.com.

This time around, Fox chose to cut down on the number of candidates who will be permitted to attend. Just 7 of the remaining 12 met the network’s more stringent polling qualifications for the primetime event. They are Donald Trump, Ted Cruz, Marco Rubio, Ben Carson, Chris Christie, Jeb Bush, and John Kasich.

Earlier in the evening, at 6 pm Eastern, Carly Fiorina, Mike Huckabee, and Rick Santorum will participate in the undercard segment of the debate. Rand Paul qualified for the undercard too, but has said he’ll boycott it in protest of being dropped from the primetime segment.

What to expect at the Fox Business Republican debate

One week ago, the New Republic’s Jeet Heer tweeted that “The Republican Party increasingly resembles the end of a Tarantino movie, where everyone is pointing a gun at each other.” That’s essentially where we are right now — attacks have been flying fast and furious among the remaining GOP candidates since the new year began. But there’s a rhyme and reason to it: the two main battle royales are Trump vs. Cruz, and everyone vs. Rubio.

The top two candidates in polls, Donald Trump and Ted Cruz, are locked in a competition to win the Iowa caucuses. So, now, they’re squabbling over whether Cruz is even eligible for the presidency — most experts say he is, but Trump has been expressing “concerns” that he isn’t. For his part, Cruz has long deliberately refrained from attacking Trump in hopes of picking up his supporters. But there were signs that might finally be changing this week, with Cruz stating Tuesday that Trump represents “New York values” (whatever those might be).

Meanwhile, four establishment-friendly candidates — Marco Rubio, Jeb Bush, Chris Christie, and John Kasich — are all desperately competing with each other for similar voters in New Hampshire, where they’re all within a few points of each other. Accordingly, they’re all slamming each other with negative ads and attacks, and devoting comparatively less effort to taking down Trump. Bush’s Right to Rise Super PAC has particularly unloaded on Rubio of late, trying to prevent Rubio from performing well in an early state in hopes that his candidacy will be nipped in the bud before it can get off the ground.

But it’s not just the establishment-friendly candidates who are going after Rubio. Cruz and his supporters appear to view Rubio as their most serious threat among those four establishment-friendly candidates, so they’re going after Rubio hard, calling him weak on immigration and untrustworthy on national security. Essentially, everyone benefits if Rubio stumbles. So expect a whole lot of attacks aimed at him Thursday night.

Online: At FoxBusiness.com, a free live stream will be available to all