Home
Politics
There will be a noticeably empty seat at the State of the Union this year. Here’s why. 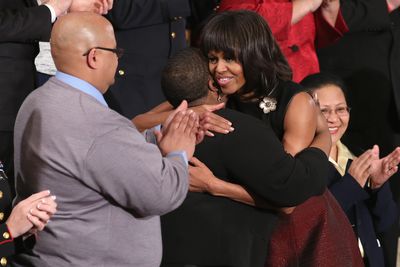 It’s a longstanding tradition for the first lady to invite several lucky guests to sit in her box for the State of the Union. They’re typically ridiculously high achievers and individuals whose life stories illustrate a major point the president is trying to make.

This year, the White House has only announced one guest so far – and it’s an empty seat.

During a call with gun control supporters, President Barack Obama announced he planned to leave the seat empty to commemorate the lives of gun victims lost and give a voice to those who can no longer speak, according to a White House official.

The symbolic move comes on the heels of other gun actions the president took this week. He announced more than 20 executive actions designed to tighten gun sales made without background checks.

And in an op-ed in the New York Times, Obama pledged not to support any candidate, including Democrats, who don’t support further gun restrictions. It’s unclear, however, what this pledge might look like in practice, as Vox’s German Lopez argues:

All the major Democratic presidential candidates back more gun control measures, even Bernie Sanders, who has been a moderate on the issue in the past. It’s possible Obama’s threat applies to some lower-ticket candidates, like those running for the House of Representatives or Senate, but it’s unclear if a Democrat maintaining a timid approach to guns would be in a state in which he or she wants the president to campaign.

Meanwhile, Republican presidential candidate Ted Cruz responded that he would save a seat for his own political cause: