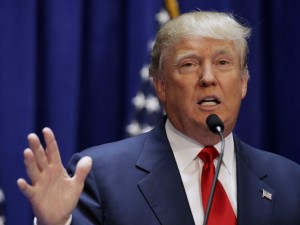 Trump’s assertion, which his campaign manager insisted was irreversible, came less than one week before the kickoff Iowa caucuses. He once again defied the conventional rules of politics, and used his power and prominence to shape the campaign agenda and conversation.

So far, Trump’s untraditional moves have only expanded his support, but his threatened boycott leaves him open to criticism that for all his tough talk he is ducking face-to-face confrontations with his opponents and scrutiny from the Fox moderators.

Given Trump’s past flirtations with boycotting Fox, many will doubt his declaration until they see the other candidates take the debate stage on Thursday night without him.

The Republican debates have become must-see television, in part because of the allure of Trump’s star power and unpredictable candidacy. But he said Tuesday that he thinks Fox and other television networks have been taking advantage of him by selling advertisements for their debates at a high premium.

“Why should the networks continue to get rich on the debates?” Trump told reporters at a news conference in Marshalltown. “Why do I have to make Fox rich?”

The debate is scheduled to be in Des Moines, Iowa, on Thursday, and Trump said he would instead host a competing event in the state designed to raise money for wounded veterans.

Trump is the first candidate in modern memory to say he would withdraw from a debate at such a consequential moment on the primary calendar.

Trump long has objected to the participation of Fox News anchor Megyn Kelly as one of the three moderators, claiming she has treated him unfairly with both her questioning of him at last August’s debate and her commentary since then.

Trump also said that a “wise-guy press release” that the network issued earlier on Tuesday belittling him was inappropriately antagonistic and childish.

Fox’s statement said that network officials “had learned from a secret back channel that the Ayatollah and Putin both intend to treat Donald Trump unfairly when they meet with him if he becomes president.”

The statement added that Trump “has his own secret plan to replace the Cabinet with his Twitter followers to see if he should even go to those meetings.”

Fox is playing games. They can’t toy with me like they toy with everybody else. Let them have the debate. Let’s see how they do with the ratings

“Fox is playing games,” Trump said. “They can’t toy with me like they toy with everybody else. Let them have the debate. Let’s see how they do with the ratings.”

The statement “was a disgrace to good broadcasting and journalism,” he added Wednesday morning on Twitter. “Who would ever say something so nasty & dumb?”

Earlier Tuesday, Fox News Channel Chairman and Chief Executive Roger Ailes said the network would defend Kelly even if it means losing Trump in the debate.

“Megyn Kelly is an excellent journalist, and the entire network stands behind her,” Ailes said. “She will absolutely be on the debate stage on Thursday night.”

In Iowa, Trump is in a fierce and increasingly nasty fight with Sen. Ted Cruz of Texas. Both men have traded places atop recent polls here, and the outcome of Monday’s caucuses could have a profound effect on the direction of the nominating contest.

By announcing that he will not debate, Trump likely will dominate news coverage and deny Cruz and other opponents a face-to-face confrontation before Iowa Republicans go to caucus.

Trump’s decision also allows him to avoid direct questioning from Kelly and her co-moderators, Bret Baier and Chris Wallace, at a time when he has come under increased scrutiny over his past positions on social issues that are important to many Iowa Republicans.

The reaction from Trump’s rivals ranged from criticism to mockery.

Former Florida governor Jeb Bush, who has been Trump’s most persistent tormentor of late, immediately tweeted: “[email protected] Do you know who else is scared of tough qs from Fox & @megynkelly? Barack Obama. Enough whining.”

Cruz said on Mark Levin’s radio show: “If Donald is afraid to defend his record, that speaks volumes. If he thinks Megyn Kelly is so scary, what does he think he’ll do with [Russian President] Vladimir Putin?”

Cruz challenged Trump to a one-on-one debate sometime over the next week.

“I’m happy to go an hour and a half mano-a-mano — me and Donald with no moderators anytime before the Iowa caucuses,” he said.

At an event Tuesday night, Cruz said: “Donald is a fragile soul. You know, if she asks him mean questions, I mean his hair might stand on end.” He likened it to skipping a job interview.

He’s definitely not participating in the Fox News debate. His word is his bond

The Republican National Committee, which sanctions and helps organize the official debates, vowed late Thursday not to intervene in Trump’s dispute with Fox.

“Candidates can choose whether to participate in a debate or not,” RNC chief strategist and spokesman Sean Spicer said.

When Trump addressed reporters before a rally in Marshalltown, he said he “most likely” would skip the debate. He then said the decision was “pretty irrevocable.”

This was not the first time Trump had threatened to boycott a debate, though in the past the threats were merely stunts.

Trump’s campaign manager, Corey Lewandowski, insisted this time was different. Speaking to reporters at the back of the venue while Trump was rallying his supporters, Lewandowski vowed that the decision was final.

“He’s definitely not participating in the Fox News debate,” Lewandowski said. “His word is his bond.”

Asked whether there was anything Fox executives could do to persuade Trump to reconsider, Lewandowski said that there was not and that there were no ongoing negotiations between the campaign and the network.

The Trump campaign later issued a statement affirming the decision, saying: “Unlike the very stupid, highly incompetent people running our country into the ground, Mr. Trump knows when to walk away. Roger Ailes and FOX News think they can toy with him, but Mr. Trump doesn’t play games.”

Earlier in the day, Trump and his advisers had been preparing for the debate. Adviser Sam Clovis was putting together briefing books and assisting with policy discussions, and newly hired adviser Stephen Miller was set to join him.

Trump signalled on Monday that he had reservations about the debate, telling CNN’s Wolf Blitzer that he had issues with Kelly. “I don’t like her,” Trump told Blitzer. “She doesn’t treat me fairly.”

Trump and Kelly tangled at the first GOP debate in August in Cleveland. Kelly asked Trump to explain offensive comments denigrating women, and he took offence to the question.

It could turn out to be a very smart move on his part, because one of the moderators is Megyn Kelly, and him and her don’t get along real well — they’re almost like an ex-boyfriend, ex-girlfriend

Since then he has carried on his feud with the Fox anchor. On Tuesday, explaining his decision not to debate this week, he referred to Kelly as a “lightweight” and a “third-rate reporter.”

Throughout the controversy, Kelly has held her ground, saying her questions were tough but fair.

Some of Trump’s supporters said in interviews Tuesday night that they support his decision because they think he has been treated unfairly in past debates.

“It could turn out to be a very smart move on his part, because one of the moderators is Megyn Kelly, and him and her don’t get along real well — they’re almost like an ex-boyfriend, ex-girlfriend,” said James Wachendorf, 30, who awaited Trump at a rally in Iowa City.

Wachendorf’s wife, Tara, 27, said of Trump: “Everything that he does is so well-thought-out. He’s good at creating controversy, and that’s what’s bringing him more voters. People like that.”

The couple wore matching red Make America Great Again hats, and they both plan to caucus for Trump on Monday. They said they watch all of the debates. But if Trump doesn’t show on Thursday, they said they might not tune in.

There will be a noticeably empty seat at the State of the Union this year. Here’s why.

Want to know why so many Republicans hate Ted Cruz? Read his book.