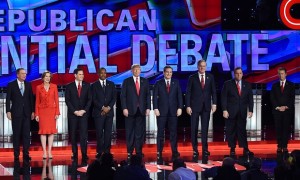 It’s rare that Cleveland should set nerd hearts a-flutter. But there is, on the horizon, the possibility of an event so rare, so weird and so fraught that every U.S. politics wonk is clearing his schedule for July.

That’s because it’s possible that the Republicans will not select their nominee before the official convention in Ohio. If that happens, we will see a brokered convention — a floor fight — for the first time since 1976. A kind of jockeying, process-driven chaotic mess that will have every campaign digging up antique rule books, horse trading for delegates, and openly whining about the outcome.

This would be glorious.

(Full Disclosure: I’m married to a political consultant who works in the U.S. He previously worked for a data vendor with several Republican clients, including presidential candidate Ted Cruz.)

I don’t mean to get everyone prematurely excited. Both the Democrats and the Republicans have, over the years, jimmied their nomination processes to prevent outcomes as exciting as this one. No one, except for journalists, enjoys uncertainty, and it’s so much easier for both parties if a convention feels more like a ritual campaign kick off than an actual contest complete with sore losers and spilled milk. So there’s a very good chance it will come to nothing.

Brokered conventions were once a common phenomenon. Delegates showed up not knowing who the nominee would be and the convention itself was the defining moment of the primary. Hordes of delegates would literally herd from one candidate to the next as losers dropped off the ballots. Alliances, endorsements and promises of power and policy were openly declared and the whole thing was just terribly exciting.

Or so I’m told. The last time anything remotely like this occurred in the Republican wing was in 1976 when Gerald Ford failed to secure enough delegate votes ahead of the convention against Ronald Reagan. Ford won on the first ballot, however, and all the hopes of that era’s political journalists for a long, drawn-out battle were soon dashed.

In modern politics, the call for party unity has effectively squashed the spontaneity of the convention floor. It just doesn’t look good to have such rivalries and hostilities so openly displayed. So much better for even disillusioned partisans to appear to coalesce around a single figure — preferrably one moderate enough to go on to win a general election. In addition, the sequential nature of primary races tends to create a bandwagon effect. As clear winners emerge from early states, the field tends to winnow itself down. This is why Iowa and New Hampshire are considered such important battlegrounds; they will set the tone for future states.

The very unlikeliness of a proper floor fight is part of what makes the prospect so exciting, and confusing. There are two matters making the whole issue even more complicated.

The first is that the number of delegates is assigned per state according to a byzantine formula that takes population, districts, electoral and fundraising success into account.

The second is that each state has slightly different rules governing who becomes a delegate and how many of its delegates go to which candidate; for example, in Iowa, the delegates are distributed proportionally according to how many votes each candidate reserves. Other states, including giants like Florida, are crucial “winner take all” battlegrounds where the candidate who wins a plurality of votes will win all the delegates.  Still others, like South Carolina, are a hybrid of the two, where it’s winner take all by Congressional district.

But these delegates are not all bound to vote for a specific candidate at all, and even some of those that are may switch their vote as soon as the second ballot during a convention.

To make matters even more fun, the Republican National Convention also has to deal with “Rule 40,” which states that a winning candidate must win a majority of the delegates in eight states. This rule will almost certainly be abolished on the grounds that it’s mathematically unlikely that any of the dozen remaining candidates will be able to meet it.

The sheer number of contenders will ensure that the delegate vote will remain precariously split well into spring, likely between Marco Rubio, Donald Trump and Ted Cruz. But there’s another factor that has thrown a wrench into the works: Trump.

Trump has spent comparatively little money to maintain a commanding lead in the race. His personal ego and fortune will ensure he sticks around to the bitter end, at the very least, dividing the support among his competitors, if not winning outright.

The longer the race draws out, the more important traditionally Democratic states become. A whole thwack of delegates will come from California, for example, which has less influence than it should by population because the nominee has traditionally been decided by the time the west coast Republican caucuses get to vote.

Because of this, one can’t rule out thus far unpopular establishment candidates like Jeb Bush, whose SuperPAC has managed to out-fundraise all others despite dismal polling figures. In short, the longer this race continues, the more volatile it may become. The first caucus will begin in Iowa in only four weeks. In the meantime, the whole show should make us all very thankful to be Canadian.