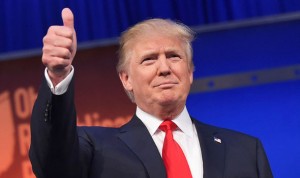 “Can Donald Trump actually be the Republican nominee?” The Washington Post wondered the other day, repeating a theme that has been perplexing American pundits for some time now.

The first formal Republican test is next Monday in Iowa. The first primary, in New Hampshire, follows eight days later. As the bombastic real estate mogul fails to fade from the race as expected, a new emotion is taking hold, a mix of wonder and consternation. It’s as if the people who have been laughing, or more likely sneering, at Trump since he launched his unlikely campaign can’t quite believe what they’re seeing. They can’t accept it’s because voters are drawn to his politics, which are nasty, rude and simplistic. It must be, as New York magazine suggested, because they’re even more afraid of Ted Cruz. A Bloomberg correspondent, sent from Germany to provide a fresh set of eyes, noted that Trump’s audience is large but gets bored quickly, and only really gets excited when he insults somebody.

It barely matters any more. CNN’s latest poll gives Trump 41% support among Republicans, more than double Cruz. None of the “establishment” candidates – Rubio, Bush, Christie — even draws double figures. It might be time to quit asking if Trump can win and ponder this instead: What happens when he does. Democrats are giddy at the prospect. They can’t imagine there’s a Democratic candidate bad enough to actually lose to Trump.

Perhaps they’re right. The odds are still pretty strong that Hillary Clinton will be the Democratic nominee, even if she can’t manage to defeat Sen. Bernie Sanders, her only real challenger, in New Hampshire and Iowa. She’s been First Lady, New York senator and Secretary of State, yet she can’t outpoll a wild-eyed socialist from Vermont, a state with precisely three votes in the electoral college. Is it all that certain, then, that she would easily triumph over Trump, who many Democrats assumed wouldn’t make it through the summer?

Michael Bloomberg isn’t convinced, or he wouldn’t be floating the possibility of entering the race as an independent. And while Clinton still leads nationally, her gap over Sanders is narrowing. Let’s say, just for the sake of it, that Democrat voters become so convinced of Trump’s electability that they decide to roll the dice and make Sanders the nominee? It seems unlikely, but his message clearly has great emotional pull. The Democratic party has shifted firmly to the left under President Barack Obama, and leftists don’t believe Clinton is truly one of them. She’s a centrist, pretending to be whatever voters want at the moment. Sanders is promising free, single-payer health coverage for everyone, and free college tuition. He’s not worried about the cost; he says the rich will pay, and besides, it will be cheaper in the long run. What’s Hillary offering in return?

Michael Bloomberg isn’t convinced Clinton is a lock, or he wouldn’t be floating the possibility of entering the race as an independent.

Sanders versus Trump would be a contest for the ages – the most left-wing major-party candidate in history, versus the most outlandish. Trump has no real policies, other than insisting he’ll evict illegal immigrants and deal with Vladimir Putin through his own inherent awesomeness. No matter who won, it’s impossible to imagine the U.S would emerge with any resemblance to the country we know today.

Leonid Bershidsky: Clinton versus Sanders is a case of caution versus impatience

Polls show that Bernie Sanders has drawn level with Hillary Clinton in Iowa or perhaps even overtaken her. After attending the two Democrats’ events in the town of Clinton on Saturday, I think I know why.

What if Clinton does fend off Sanders and lead her party into the campaign? If she can’t handle Sanders – who is polite, respectful and fair – can she hope to deal with the brutish, loud-mouthed Trump? Given his lack of ideas, Trump would have little option but to run on his personality, only more so. He has raged, bragged and insulted his way past a dozen better-qualified Republicans. Against all the odds, it’s worked. Is there any logical reason to expect it won’t work against Clinton?

It could be a mistake to expect too much propriety from the American electorate. Trump didn’t get where he is because he appeals to a thoughtful, well-informed base of reasonable conservatives. He’s tapped into a sense of blind outrage at the state of politics today, and the seam is clearly far richer than anyone expected. In a competition for the anger vote, Trump wins hands down. No one who’s angry sees Hillary Clinton as the solution.

A Trump presidency still seems far-fetched, but not as impossible as it once did. For all their fervency, the number of angry white males is vastly outnumbered by the army of other potential voters — women, blacks, Hispanics, moderates – who could overwhelm his forces. Yet the angry brigade has managed to control Congress for all but two years of Obama’s term, forcing him to spend his last year pushing through what measures he can via executive orders. Trump’s challenge will be to maintain and expand the sense of disaffection that is the foundation of his support, and hope it lasts right through to November.

Can he do it? He’s shown that, along with self-promotion and an unflinching ego, pandering to the mob is one thing he’s really good at. The question is whether the mob’s big enough to storm the White House.