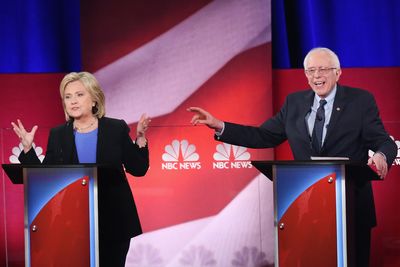 In the latest debate, Democratic candidates Hillary Clinton, Bernie Sanders, and Martin O’Malley quickly brought up mass incarceration, police shootings, the war on drugs, gun violence, and racial disparities in the criminal justice system. During all of the Republican debates, candidates rarely raised these issues; if they came up at all, it was usually during a narrow one-off question-and-answer.

The last Republican debate, for instance, was in North Charleston, South Carolina — a city where a police officer was recently charged in a deadly shooting. Yet that prominent case didn’t come up, and neither did the surrounding issues in a significant way.

The partisan contrast should come as a surprise, considering criminal justice issues have emerged as a bipartisan cause in recent years. President Barack Obama cited criminal justice reform as one of a few areas both parties in Congress are working together. Several media outlets, including the Associated Press, predicted that presidential candidates from both parties would take on reforming the criminal justice system in 2016. The billionaire conservative Koch brothers have teamed up with liberals on prison reform. And the Black Lives Matter movement has obviously put a tremendous spotlight on the justice system in the past few years.

But the debates have showcased a clear partisan divide: Republican and Democratic presidential candidates aren’t putting equal weight on criminal justice. The GOP has shifted away partially from its reputation of the party of law and order, but still that doesn’t mean criminal justice reform is at the top of its national agenda — despite the broader trends taking shape across the country.

Voters and lawmakers from both parties are moving toward reform

Criminal justice issues are big in the US today. Not only is reform moving at all levels of government, including Republican-controlled states, but polls show bipartisan shifts in support for change.

Take, for instance, harsh mandatory minimum prison sentences for drug crimes, which can require courts to impose decades in prison for nonviolent drug crimes. Surveys by the Pew Research Center have found that Americans from both political parties have shifted toward repealing mandatory minimums:

So a plurality of Republicans agreed, as early as 2014, that the US should shift away from mandatory minimums for drug crimes. There was more Democratic support for reform — but there was a lot of Republican support, too.

There’s also a shift when it comes to racial inequality, which is typically an issue that Democrats care more about. There are signs, for example, that both Democrats and Republicans have become uneasy with the treatment of black people in US society as the Black Lives Matter movement has protested racial disparities in police shootings and the criminal justice system.

According to Gallup surveys, 49 percent of US adults in 2015 said they’re satisfied with how black people are treated in American society, down from 62 percent in 2013. That drop included Republicans: Their satisfaction in how black people are treated in US society dropped by 10 points between 2013 and 2015, from 76 percent to 66 percent. That’s less than Democrats — who reported a 20-point drop, from 51 percent to 31 percent — but still a significant drop.

Of course, there are other aspects of the criminal justice system that Republicans find troubling — mainly, the system’s cost. By some estimates, mass incarceration costs as much as $80 billion each year — mostly at the state and local levels. That’s a very high cost for mass incarceration policies that the empirical research shows have no longer significantly cut crime.

Among the champions of reform is Georgia Gov. Nathan Deal, a Republican. In 2014, Deal proudly announced that his state had cut back on incarceration, saying, “Since taking office, I have spearheaded legislation to overhaul Georgia’s adult and juvenile criminal justice systems because we simply could not afford the continually increasing costs of incarceration.”

It doesn’t take a vivid imagination to explain why this framing works. Republicans by and large think the government spends too much money. So why not save by cutting back on expensive, ineffective criminal justice policies? It’s a framing that has clearly worked at the state level — and offers a blueprint for GOP presidential candidates.

But to even get to that framing, or other aspect of the issue, Republican candidates will need to bring up these issues in the presidential debates. So far, that hasn’t really happened.

Gil Troy on American fascism: How this straight-shooting, uber-famous, cranky billionaire is tailor-made for the times